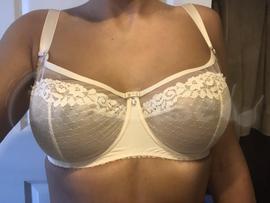 So this is one of three bras I received this week from my very first Kinga order! I have been curious to try this brand because they are very reasonably priced, they have cute designs, and per other reviews they sounded to not be so narrow as Comexim (I love my Comexims for the oomph factor but am more interested in regular work wear bras at the moment).

My sizing in Polish bras feels a little all over the place depending on manufacturer - I am even when I do the bend over test, but technically FoB due to short roots. I have soft tissue that will mold to any shape. My "oomphy" Comexim plunges are 65H but they are truly a bit small - I have to wear them with an extender to give me an extra set of hooks and I bet my true size with them would actually be 70H. Haven't found a Comexim half-cup that agrees with me yet - all have been a bit too tall.
Hopefully they have good Black Friday sale so I can try some more! I wear 65FF in EM plunges and 70F in BM & SM cuts. I wear 70F in Avocado NF cuts and 65F in their HCT/HCQ style. 65G or 65H in Gorsenia. So I was agonizing over whether to order 65G or 65H or 70G in Kinga - I decided to go with 65H to be on the safe side, since I was wanting to find some plain old regular daily bras and would rather the cup be a little big versus too small. Plus if 65 is tight I can just throw on an extender, no big deal. My snug underbust is almost 29.5 so that puts me in a weird place in between 65 and 70. Sometimes a 70 is just more comfy because I have no fat under my boobs, it's literally just skin & rib bone. I'm a pear shape so all my fat is on my hips & thighs... Regardless, I'd rather use an extender on a tight band versus just having a loose band and you just never know how stretchy a band is going to be, esp with a never-tried-before brand.

This Limpid II bra is an unlined...balcony I guess? They don't specify on the site. I chose it because the cups look to be closed in on top and I figured that would lessen the risk it would gape on me because that is always a concern. Band feels nice & snug but not too tight, so I don't think I'll need an extender....but I haven't worn it for several hours yet. Even so, it wouldn't be crazy to need an extender for first couple of wears until the elastic gives a bit. No side boob or armpit fat overhang - yay! The bra is a plain nude color but I do like the lacy detailing and the little jewel ornament at the top of gore. Gore tacks nice and comfortably, width ok. Top of cup is a teeny bit loose on my smaller breast (right breast) but pretty close to perfect on left breast. Feels comfortable, I feel supported, and I'm getting good lift. My only concern is how far the wire goes around my side - I did want wider than Ewa/Comexim but this is a little too wide! This is making me think I should have picked a 65G instead or even go up to a 70G or 70F to give me a narrower wire. The wires are not uncomfortable though, bra feels fine so maybe there's really nothing to fix or worry about here since there seems to be no ill effect - I'm just not used to the wire wrapping around so far. Would love to hear feedback on this aspect if anyone has an opinion though!

Quality: Acceptable quality but you can tell this is not nearly as luxe or well-made as EM. There were some loose threads and ravelings and it just doesn't feel as sturdy or well-constructed as EM. I'd say it ranks last in quality compared to the other Polish bras I've tried thus far (Avocado, EM, Comexim, Gorsenia) but they are cheaper so can't really complain because you get what you pay for. And it really is acceptable, just this is obviously not what you'd pick if you're wanting luxurious-feeling materials.

Kinga is having yet another 20% off sale this weekend so maybe I'll order a similar style bra in 65G or 70F/G just to see. I ordered a padded push-up bra too in 65H and it fit fantastically (will review it later). On another note, I ordered the matching thong for this bra and OMG these bottoms are small & tight. As I said above, I'm a pear - narrow on top and big ass hips. I'm so funny built - 28 inch waist and 41 inch hips. So I always order an L or XL in bottoms and usually that's fine. For example, I always order a 40 in Ewa bottoms and they are usually a perfect fit. As soon as I took the thong out of the package I was eyeing it and thinking "no way this fits" it looked so small. And i was right, it is MEGA tight. I'll have to re-order it two sizes up in XXL in order for it to fit! Just bulging hip fat everywhere, ugh. The briefs were ok in size L but these thongs run really small. I did not even take any pics of me wearing it because NOPE. But as far as the bra goes, I am really encouraged to try more offerings from Kinga and figuring out if 65H is truly my optimal size or not - fun times ahead!