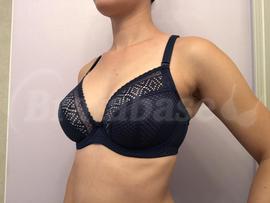 The long-awaited (or not lol) Cleo Atlanta review. I've worn it twice now for full days of work, and I have so many things to say about it, so buckle in!

First of all, I need to tell you, I shortened the band because I had to. I saw that Secrets From Your Sister in Toronto had gotten this bra in, but only in my sister size of 30E. So I knew from the get-go that I would have to alter it to make it work. The fitter was a little taken aback, but I assured her that I'm handy with a sewing machine. So, I (conservatively) shortened the band. I realized after I wore it that despite shortening it to an appropriate length, the band still had to be broken in, and this resulted in the band stretching out to the point that it's back on the tightest hooks for me lol. I guess this is preferable to shortening it too small in the first place though. I can shorten the band again, no problem.

So, with the band shortened once, this is how it fits. It could be a little more snug in the band, but like I said, I can fix that (again). So let's move onto the cups. The two most noticeable features are that the cups have a side sling, and they have a thin strip of elastic sewn onto the edge to prevent gaping. Let me say first that I'm very impressed with the design of the side sling, because it doesn't cut into my tissue at all. It just helps gently shape. The elastic, however, may very well need to go. I'm pretty full on top, moderately full in centre, and my tissue is quite firm. The elastic cuts into my tissue, but with the plunge shape, it's not actually noticeable when I'm wearing clothing. The bulging is all along the inside edge, towards the gore. This wouldn't be so bad except for the fact that it gets worse as the day goes on and the bra settles onto my body. So I may have to take a leap of faith and remove the elastic (it's only sewn on with a simple zigzag stitch, which would be easy to rip out without damaging the lace over top). My only concern is that the lace may not have enough structure on its own, and may gape if I do this. Having said that, the cups give a wonderful shape under clothing. Rounded and lightly peaked. Just lovely.

Next, let's talk about the wires and gore. I'm very happy with the width (it doesn't seem too wide), and the gore is nice and short, and doesn't bother me personally. The wires still seem pretty stiff, if you're wondering. The sides of the cups (between the wires and the straps) don't seem to dig into my armpits, and don't seem to bother me.

Lastly, the straps. Oh, the straps. So beautiful, and so finicky. The straps are attached with the usual leotard-back style at the band, and are attached more close-set at the cups than the usual Cleo balconette bra. This is aided by the fact that the straps are attached to each other at the upper back using strap elastic attached perpendicular (horizontally) and a strong magnet. This is all great news for those who struggle with slipping straps. The straps have symmetrical lace panels running vertically from the upper back to the band, starting wide at the upper back and tapering down to very narrow at the band. (See my pictures if the description is unclear). The biggest problem with this is the height/length of the lace panels. I'm not sure if the problem is exaggerated because I bought a sister size, or if I just have a somewhat short upper back (or rounded shoulders), but the lace panels tend to ride up to my neck. Most of the pictures of this bra show that the lace ends around the same line as the shoulders, but when I wear it, the lace creeps up to my neck, almost to where a halterneck bikini would sit. I was wearing it at work the other day, and my male coworker pointed out the lace peeking out above the back of my uniform shirt (it's a v neck t-shirt). I told him not to worry about it (don't worry, he's very kind. He was just confused by it). This problem is exaggerated by the fact that I currently have to wear it on the tightest hooks. When I am able to wear it on the loosest hooks (like when I first altered it, before it was broken in), it allows the top of the lace (the widest part, with the magnet) to lay flat, and it prevents it from riding up too much. But when it's on the tightest hooks, I feel like the part where the straps attach to the band is narrower, or closer together, than the width of the top of the lace, so it kind of gets pushed together, and the slack rides up. My only potential solution for this would be to shorten the length of the lace panels, which I could do one of two ways. Either I could rip out the stitches at the bottom of the straps (there's a metal connector there) and pull the strap and the narrow end of the lace through the connector and sew it shorter, but this may result in some bunching of the lace. Or I could stitch rip the horizontal strap elastic off at the top and replace it lower, folding under the excess lace as needed.

Lastly, the lace panel drastically shortens how much the length of the straps can be adjusted. So if you need short straps, this may not be the bra for you. I'm currently on the tightest setting, and it's working okay for me. I can shorten the straps from the front if needed.

Quick thoughts on the matching brazilian panties: Why are these in style?? Also why are British panties so much larger than their US counterparts?? I got a Small pair and I realize now that they're just too big. Also they're meant to be worn high on the hips, so they have such a looooong crotch gusset. Once again, I am a short person, and I do not need such long gusseted underwear. I would be interested to try these in an extra small.

Final thoughts: I think it would be worth it to try the Cleo Atlanta in my closer sister size of 28F. This may or may not fix some of my problems with the scaling of the whole thing. But aside from that, I'm pretty darn happy with the wearability of it right now, and I know I can still adjust if/when needed.

PS. I have a bunch more photos if you go to the bra info page on my profile! All the pictures on here currently are from before I shortened the band.