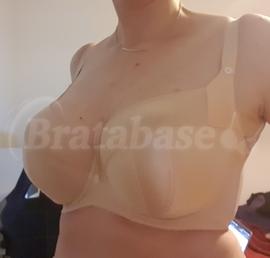 Measurements to be added...

I can't quite decide if this bra is too large for me or not. The tough thing about being in between sizes is exactly that... the 65GGs really are too small. 65H....slightly too projected for my size. I was hoping getting an Sf would actually alleviate this issue that I anticipated with 65H--I had a feeling a Bm would have been too projected, but Sfs are kinda known for being less projected than Bms... not sure if it's the bra or if it's the size.

That being said, this is one of the most comfortable bras I own right now. Except for one thing--I cannot loosen the straps as much as I'd like to and it freaking HURTS. It's not that they're not long enough, it's that if they're any looser, the bra has no support. Or maybe it just feels that way to me.

Part of the issue is that the stretch mesh on top is not very sturdy. I kind of expected it to be though! I feel like if it were it would have done a better job.

And of course, I get the infamous wrinkling along the wire, but it's no big deal, I expected this.

Overall, not quite sure what to make of this bra. I did *just* get my period so perhaps I'm at my smallest right now.