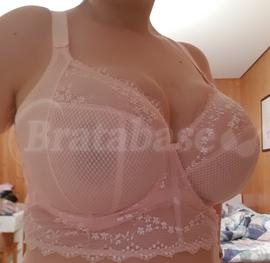 The first time I ever tried a bralette bra. It's also the first one that comes anywhere near my current size (32J). I had to sister - size to 34HH because there are no 32 bands.

The bra is made of light slightly warm toned pink lace. The upper part of the cups is made of a stretchy lace with an elastic band at the edge.
The floral embroiderie on the upper cup part is repeated on the "bralette" part around the bra. There is a regular mesh bra band and then the lace over it. It looks like a long line bra. (I'm not sure what is the exact difference between longline or bralette bra? I thought bralettes are usually without wires while longlines just have a longer band. Will edit this once I know for sure.) The band is true to size in my opinion and closes with 5 row of hooks. I found this quite difficult to do up on my own. Since the band was a bit too big, I could do it up on the front and then move it around.

My issues:
The band was too big, it did not feel supportive at all. I usually can wear the sister size 32J in Elomi so I'm not sure if these cups came up a bit small. On the other side it was probably just a problem of my very full on top boobs vs. an elastic band at the edge of some stretchy lace. That does never go well. Also all of the Elomi bras I tried so far are quite closed at the top, so even despite the stretch it does not work for me.

I found the wires to be a good width for me there was no wrinkling or empty fabric on the sides but not enough room at the top and center. I probably need the wires of a HH- cup in this bra and the cup depth and room at the top of a JJ-cup. And a 32 band which they don't make…anyway I think that the bralette part would ride up during the day, roll together and dig in at the underbust. It already did when I was taking the photos and I only wore the bra for 5 mins. I think that could be annoying. Apart from that it's a very pretty bra but I think it's mostly for looks and not everyday wear.

Top of the cup:
Cuts into breast tissue (quad boob effect)
Band fit:
The band is definitely too big