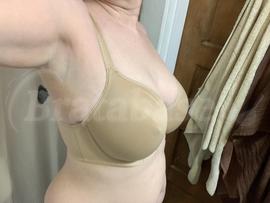 This bra is EXTREMELY similar to the Panache Sculptresse Pure. It serves the exact same purpose, to invisibly give you a great shape under clothing. Even the fit is almost the same, right down to the cup size being just a teensy bit too small for my left boob. The only reasons I picked it over the Pure were entirely subjective. In fact, objectively speaking, the Pure is probably a better bra if for no other reason than that the felt lining on the band makes it really comfortable compared to basically every other bra I've ever tried in the seamless/smoothing category. BUT -- the Fantasie gave me -- and I emphasize ME -- a slightly better shape. Your mileage may vary, but on me, it gave me a perkier shape than the Pure, to the point where I had sexy (but not extreme) cleavage. That usually never happens on me since I'm so pendulous/wide set. It also stayed put better than the Pure during the most extreme part of my "testing" process, which was zipping up the back of my favorite clingy dress. The Pure slid around a bit and required readjustment after twisting myself into a pretzel; the Fantasie did not. (Part of this may be due to the smaller band size, but there is no possible way I would have fit into a 34FF in the Pure even if it had been available -- the 36F was PLENTY snug.) The Fantasie is ever-so-slightly prettier to look at than the Pure, with shiny fabric and a cute minimalist bow on the gore. Plus the "nude" color matches my light skin tone better on the Fantasie than on the Pure. (Obviously this won't be the case for everyone.) In the end, it was almost a coin-flip decision, but I went with the Fantasie. It was a better fit FOR ME this time around. But I would still wholeheartedly recommend the Pure to anyone, if you can find it in your size!

Pros: Slightly cuter than the Pure and much more widely available while offering most of the same benefits. On me, gave a slightly better shape, as well ... but YMMV.

Cons: Single-layer cup construction offers less nipple coverage/modesty than the Pure, doesn't have soft felt on the band like the Pure