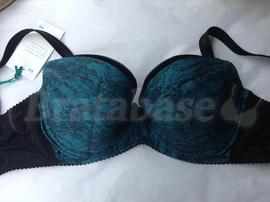 The 70G Comexim Georgia I ordered through wellfitting.com was supposed to have the same customizations I had done to the 65H Jacqueline Bra, which I bought directly from Comexim a few months earlier:

If I had known about moving straps inward, I would've requested that customization, too.

The 70G Georgia's cups are deeper than those of my 65H Jacqueline. The cup height, gore height, wing height, and 3x3 hooks/eyes are the same. When I lay the Georgia on top of the Jacqueline, the wire width is the same. This is appropriate, since they are sister sizes--or are they?

The Georgia is deeper. The top of the cups gape slightly, and I don't get the front and centeredness of the Comexim Jacqueline or of my Ewa Michalak 3Ds, Pl Onyks, and strapless bras. My breasts naturally point straight ahead, have no space between them, and, after wearing properly fitting plunge bras for a year, have a fair amount of fullness near the center gore. When I wear a bra, I want to maximize fullness toward the center gore by pulling my ample side tissue forward.

It appears reports that Comexim doesn't do sister sizes the way Ewa Michalak or UK brands do is correct. I am having the same issue with my Comexim Arizona, which I ordered with the Georgia. The good news is if you're half a cup between cup sizes in one Comexim band size, getting a sister size that isn't really a sister size may solve that problem.

The fabric part the hooks are embedded in has sharp edges. This flaw is prevalent among Comexim and Ewa Michalak bras. The Comexim Georgia, Comexim Arizona, Comexim Jacqueline, and many of my Ewa Michalaks are sharp enough to make me bleed. I don't expect the same comfort of, say, a luxury brand like Prima Donna for these prices, but no bra should be sharp enough to cause its wearer to develop scabs from doing absolutely nothing physically active while wearing it. I'm going to replace the hook section of my Jacqueline Bra, which does fit fairly well, with a softer version.

I am disappointed the Comexim Georgia doesn't fit well because its printed lace fabric looks nice, not cheesy. Skipping actual lace in favor of printed avoids the bumpiness and friction of real lace. I like my bras to be a non-issue under clothes. This bra has seams on the exterior of the cups, but they don't show under my tops. I also have no bluish greenish bras. I need some. I might reorder this in a customized 65H. It takes so long to get bras from Poland, though.

Underwire length:
Is too short on the side, boobs escape
Top of the cup:
Wrinkles, can't quite fill it
Cup's width:
Outer cup cuts into breast tissue in the sides