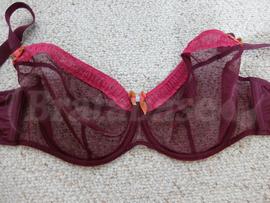 No no, it's me who's in love with Annick!
This isn't my first Avocado bra, but the previous one was second-hand with an aaaaaaawfully stretched 60 band. First time ordering directly from Avocado, I fell in love with Annick In Love the moment I put her on and I'm never ever taking her off.
The size is spot on, and the fit is better than any other unpadded bra I've ever tried so far - even better than Ewa's SM, which was my best unpadded fit before falling for Annick. The wires are rather soft, yet the gore tacks perfectly, so the combination of comfort and support is just a whole new realm of fantastic.
Plenty projection, plenty narrow, not too round - for better and for worse.
The only con as far as I'm concerned is the thin band that has only two hooks. It feels firm enough now, but I'm afraid it might stretch too quickly.
I was hesitating for a long time before purchasing Avocado bras due to the higher price point, but realising now they're completely worth it. I'd rather save up on two or three cheap ones with an ok-ish fit so I can have one magnificent piece like this one. Jeez! Now I need to eat stale bread for a couple months so I can get the Orlando.

Edit:
I now have the Annick in two colourways, and there are slight differences between them.
The Cassis bra is softer, and the band is stretchier and narrower - whereas the Black/Green bra is somewhat stiffer, and the band is twice as thick and not stretchy at all.