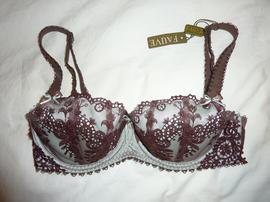 I get cleavage in this bra! Cleavage! I thought I was so shallow that cleavage was impossible. But no, this bra teases out what little cleavage I can achieve. Amazing. The tighter I pull the straps, the more cleavage (of the cakes-on-a-plate variety) I get. But of course, that's not comfortable to wear all day, so I don't.

The cups are very shallow on the sides and the bottom, which really pushes my breasts front and center. It's the perfect shape for my breasts, which don't have a lot of fullness there. It's the only bra that's come close to holding my breasts in the shape they take when I bend over. I can only imagine what it'll do for someone larger/with more projection than I have. I actually have tiny gaps right at the gore, so most of the volume is near the center/gore half of the cup.

The wires are very soft. They measure a tad narrow for me, but they stretch at the slightest tension, so practically the wires are on the wide side. My sternum curves outward from my underbust a bit, and usually I find that I need to bend gores away from me. Not so with this bra. It actually curves with my body. It does put a bit of pressure on my sternum, and it gets noticeable and slightly itchy after a while, but for the most part it's very comfortable. Technically, the gore is sitting on breast tissue, as I'm that close-set, but I'm shallow enough that it generally doesn't bother me.

The band, when new, was quite true to size, and very firm to boot. I found the loosest hook to be firmly comfortable around my 27" underbust. After the second wear, it's already starting to ride up a bit more than is normal but not enough that I'm moving to the second hook already. I'm very glad that this bra doesn't seem to have the stretchy band of its sister brand Freya.

The straps are very soft underneath, very plush. I love them. They're fully adjustable, which allows me to create as much cleavage as I want.

Seriously, this bra is so comfortable.

The cups have two vertical seams, so it's appropriate for shallow, wide, tall, FOT breasts. The lining itself is peppermint green. Everything else is brown. The band, straps, embroidery, and the mesh that covers the front of the bra are all brown. The lining is slightly shiny, but the mesh really kicks it up and makes it look very shiny. It also makes it very hard to photograph accurately. It looks slightly different depending on lighting too. I've adjusted the photos to best match the colors I see. I'm a little sad that the bra isn't actually pale peridot with black embroidery as it looks in official pictures. I like warm greens rather than cool greens, but the bra is still very pretty. Each bow (at the straps and the gore) is actually two bows- a larger brown bow and a thinner green bow in the center of the brown bow. The green bow at the gore has two little clear beads at the end.

The embroidery on this bra and the seams mean that it does show through thin and tight shirts. Ironically, this is more of a concern with my winter clothing than my summer clothing (I like loose, unisex t-shirts). It's too bad that this bra has been discontinued for so long. I might have picked it up in red as well. As it is, now I want all the Fauve half cups.