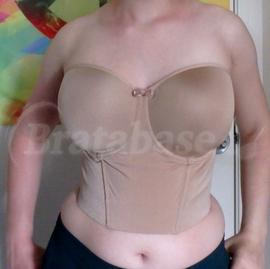 Sigh. I tried really hard not to get my hopes up for this bra. I mean, I wanted it to work - I want a strapless bra, and the idea that a bra with a low back could work was just so exciting. But I knew any number of things could go wrong.
I ordered the 34G, because the reviews said it fit like a 30GG and the measurements seemed to back that up.
The size was really weird on me. The band was too big unless it was on the tightest hooks. The cups at first felt too big, with gaping at the top. But then when I tried on the removable straps, the cups suddenly felt fine. Probably still a bit too big, but now I'm not sure how much too big, since it was so improved with just the straps.
Worst of all is how the bottom of the bra hits me. I'll be the first to admit I have some unwanted extra tummy pudge, but I have never seen it look as awful as it does when wearing this. It's like it pushes all pudge from anywhere down and out the bottom of this. Then the boning stabs that. Worse, I don't think the band would actually stay up if it wasn't pushing itself up by stabbing my chub.
The shape is very unflattering under clothes.
So this bra isn't going to work for me.

Center gore placement:
Doesn't lie flat against sternum
Top of the cup:
Wrinkles, can't quite fill it
Band fit:
The band is definitely too big
Strap separation:
Are too far apart