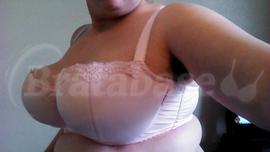 I don't think I'll ever find a perfect bra, but as far as padded ones go, I think I've come as close as I'm going to get. This is the first bra where I've been gleeful after trying it on.

The bra itself is this lovely pale peachy-pink. The top of the cups are decorated with matching lace trim, and there's a matching bow on the gore, as well as a tiny little gem. On me, the color can almost pass as a nude, which is great. The color and the simplicity of the bra itself I really like; it's not exactly sexy, rather more elegant. I approve. Also, it's a vertically-seamed halfcup so it just looks lovely and gives amazing cakes on a plate cleavage which I love. To quote my husband, "holy crap, you have a shelf".

As far as the fit goes...okay, it's not a perfect fit. It is actually a bit too small in the cup; the gore doesn't quite tack (there's about a finger-width of space) and when I push it down I get some very minor quadboob on my larger breast when the inserts are in. With the inserts, however, the cups are just about the right height for my super-short roots. I can sacrifice the gore tacking for this bra. Without the inserts, the gore still doesn't quite tack but I don't get quadboob when I push it down, though the cup is also too high on my smaller breast. So, inserts are staying in. I think that if the wires were a bit firmer (I like the nice super-firm wires in Panache bras) I wouldn't have an issue with it not tacking.

The band is a true 38 band - I measured it stretched at just over 38 inches. I think that for further EM orders I may go down to 36/80 bands. The four columns of hooks means it will be a very long time before it stretches too loose for me to wear, however. The wires are a good width, the gore is just about where I like it to be, and the sides are a good height - no armpit stabbing! Always a plus.

As far as downsides go on this bra - the edging on the straps, while pretty, makes it difficult to adjust them (I have this problem with my 85GG - Ewa Michalak » Chp Owoce Leśne (573) as well). The other thing that was immediately noticeable to me is that the inserts themselves leave some unattractive lines and lumpiness on the front of the bra. I don't imagine this will be visible unless wearing an incredibly tight t-shirt, but even so.

This bra makes me happy and I am happy with it.