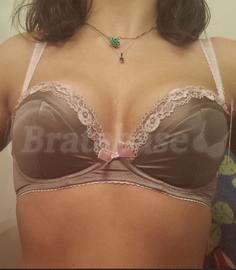 I love this bra. I wanted to wait to write a review until I wore it a full day, but I can't.

The color is slightly different in person. It's somewhat difficult to capture. It's like a gray tinted mauve. I guess technically mauve is gray tinted, but this is..more so.

I'm going to be writing in my blog soon, if I can figure Wordpress out on my phone, so for colors that are difficult to capture, I'll add color examples of what this and other bras I own actually look like irl. I guess for the most part, the pictures are pretty accurate.

The straps and center bow are a delicate, pink tinted lavender.
The fabric is very satin-y, which is something I've been looking for for quite a while.

Cups and up front and centered. I definitely think I like the Ch/Chp better than the 3D, MP, and Pl.
The 3D tapers off slightly so it doesn't totally hold my boobs in the center. I believe that's the way the bra is supposed to fit, looking at other 3D's and the fit on EM models, but it's not a favorite.
I should note that I don't dislike it either though, I think I've just discovered that Ch is my favorite from what I have from EM so far. https://d28qt14g3opchh.cloudfront.net/smileys/icon_smile.gif" alt=":)" />

These cups leave some space in the center and taper up, slightly. That sort of fit doesn't normally work for me, but this is still low enough, not too tapered, and not moulded, so it ends up working out.

Speaking of which, similar to Comexim and my Lawenda Ch, the Paris Paris is pretty lightly padded. A little more than Comexim, but not by much.

Center wires are still touching, and as always,wires are narrower and centered.
Padding is plushy and super comfortable as I've experienced with my other Ewas and Comexims.

The band on this is the tightest of the bras I received. I haven't taken measurements yet, but I'm going to guess it stretches to about 28", maybe 28.5" because I can still hook it, it's just a little uncomfortable and I'll be wearing it with an extender for now.

Cups give a nice rounded look. I'd say the cups in the Paris 3D are a bit different than the cups in my Rapsodia Pl and my Lawenda Ch. The Ch seems to run large, Pl runs about TTS, and the 3D seems to be just a tiny bit little less deep than the Pl.
I don't believe I can wear the pads with this, but I probably wouldn't size up either.

I started wearing bras that were too roomy, and my boobs would float around in the cups after a while, so at this point, I'd rather have a slightly small cup than a slightly big one.

The shape it gives is similar to the Pl, but perhaps a little less cleavage-y, even with the pads and seeming a tiny bit too small with them in.
I think that may be because the Pl was cutting in at the centers a bit, but even with the pads out and not cutting in, I think it was more of a cleavage bra.

Overall, really love the bra. Love the pink tinted, lavender lace detailing on top of the cups.
Comfort is an 8/10 for me.

I'd recommend this to anyone more narrow rooted, who has closer set to maybe 1-2 finger width distance between boobs. I think this bra could work with that. https://d28qt14g3opchh.cloudfront.net/smileys/icon_smile.gif" alt=":)" />
Shape-wise. I've gotta say, I'm new to EM, and I feel like her bras are intended for either FoT, even, or soft tissue FoB. Her cups seem to increase in depth as the cups get higher. I think this is intended for pushup effect. Firm FoB might work. I really don't know for sure because I'm just getting acquainted with these bras and this is my first 3D.

In any case, I'd still recommend anyone who needs narrower wires to try EM and Comexim bras no matter what their shape.

The Paris 3D in particular I think would work with slightly FoT, slightly FoB, or even. Either extreme I could see having some fit issues, such as needing to size up or possibly cup gap.

For anyone with a similar frame + size, I haven't experienced any problems with the straps. I measure about 11" across from collar bone to collar bone end (at shoulders). Maybe that can help someone else who has a smaller frame estimate if the straps should work ok for them also?
I saw that was an issue with EM, so I'd like to keep addressing it in my reviews (and edit+add to those I've forgotten!).