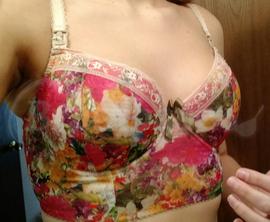 This is probably the best fitting bra I've ever owned, and it's beautiful too!

I ordered from A Sophisticated Pair and asked for these alterations (note: alterations now cost an extra $5 when ordering from ASP):
- Reduced cup
- Raised gore
- Straps moved in
- Nursing clasps added

It turns out I probably didn't actually need the raised gore, but it doesn't hurt the fit, either.

Anyway, I love that the band doesn't flip up like my Freya Piper longline. It's made of a stretchy material that almost feels like a swimsuit, and it stretches to my body perfectly. And even though the wires kind of float where they should sit below my breasts (possibly because of the soft wires?) I don't even care because the length of the band means it's still very supportive.

I also love that I was able to get it made into a nursing bra. It's so nice not to have to unhook my bra in the back and half take it off whenever I need to feed my baby. If you're a nursing mom and you fit in Comexim, seriously, look into this option. It is amazing!

The cup on my larger breast quads just a tiny bit, but not enough that I think I'd benefit from a larger size. I think this cut is a bit wider and shallower than typical Comexim, but I don't think I'm super-projected anyway, so this doesn't bother me. The shape is rounded and looks great under shirts, but you will probably be able to see the seams under thin t-shirts.

The only downside is really the large band. I heard from other reviews that sizing down in the band is probably a good idea due to the stretchiness, so I got a 60 instead of the 65 I got for my Irish Coffee, but unfortunately I'm wearing it on the tightest hooks already. I definitely should have gotten a 55, possibly even a 50, and my underbust is somewhere between 27 and 28 inches. Another unfortunate thing about the band is the closeness of the hooks. The three rows of five hooks are spaced closer together than any other band I've ever seen, further reducing the possible wears I could get out of this band. I'm probably going to have to take it in once it stretches out more.

I definitely want like 10 more bras with this cut. I've been eyeing the Ingrid for a while and might ask for that as a longline with this half cup cut.