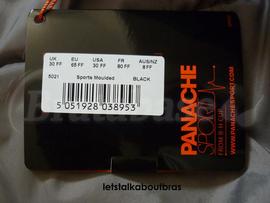 This bra has a lot of great reviews. I like the appearance of it, especially some of the older season color combinations. In all the reviews I read online, I also liked how it looked on, the coverage, the overall sturdiness of the construction and the shape under clothes. However, I have had nothing but trouble with the Panache Sport (wired) bra. It doesn't live up to the hype for me.

I typically wear a 30G and was recommended to size down in the cup for a 30FF. When I tried the bra on in an independent boutique, they didn't have 30FF in stock, so I tried 32F and 30G. The 32F was swimming in the band, but right in the cup. The 30G was comfortable in the band (not snug, just comfortable), but gaping in the cup. So the fitter and I confirmed that a 30FF would be the way to go. I ordered the 30FF in black from Nordstrom even though I preferred the older season colors (for free returns).

The first thing I noticed is that the 30FF was too small in the cup. The FF is half a size too small for my larger boob although a perfect fit on the other side. I fill out the cups well all the way to the wire (no wrinkling at the bottom of the cup), but there is some gaping at the "sides" and quadding on the larger boob over the top. The side panels seem to gape outwards when I put my arms down/relaxed. On the plus side, the wings don't go up too high into my armpit area. The band is firm enough for support on the last hook, but could go to the second hook. Comparing this to the 30G - Panache Sport » Non Wired Sports Bra (7341) that I will review soon, the non-wired has tighter band.

On the whole, the bra "fits". Unfortunately, it is incredibly uncomfortable. The deal breaker is that the straps feel very hard and scratchy. I have to tighten them all the way and I still need a couple more inches of tighten room because it's not enough (I'm short with high set breasts). While the J-clip helps with the support a little, it hurts really badly to have it clipped. If I loosen the straps, the pain lessens on the clip, but then so does the support. I can't get a happy medium. The longer I wear it, the more it hurts. I would not recommend it for anyone with sensitive skin or shoulders. When I took it off, I looked like I had been attacked by a cat.

I am also not sold on the underwires. The padding around them seemed mostly sufficient, but the channels are a little longer than the wire and I don't know how long they would last without poking through. The wires aren't uncomfortable just wearing the bra, but doing some side to side motions and turning were abrasive for me. I have bony ribs without much "squish", so this could be a factor.

I was surprised to much prefer the non-wired version. I will add a review for that one shortly.