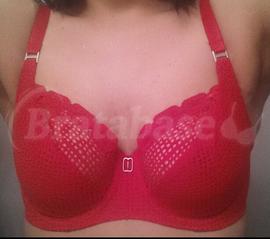 This bra is 100% for me. Finally!
Narrow wires, decent projection. The gore is further apart, but with the narrow wires, it's not as big a deal because my boobs aren't being squished closer together.

I ordered a cup size smaller after seeing the measurements, and would advise others to do the same.
I stuck with the band, and it's nice and firm.

Literally the ONLY thing that isn't a great fit with this is the fact that my bigger boob JUST fits in the cup. It cuts in just a tiny tiny bit, but not noticeable or painful.

The appearance of this bra isn't great, but it isn't bad either.
It's not scratchy as I suspected it might be, and honestly feels pretty much like any other bra to me(material wise), as in, I don't notice it.

The shape it gives is very uplifted, even for me, which is great and exactly what I've been looking for.
It's more pointy on me, but also semi rounded (and I'm a bit conical). I would imagine it'd appear much more rounded with rounder breasts, obviously https://d28qt14g3opchh.cloudfront.net/smileys/icon_razz.gif" alt=":P" />

I've been looking for a more practical, every day bra, and this definitely does the job.
I'm so happy because lately I've been having such bad luck. The wires on this make it better than my Freya Hopscotch Longline.
I'm totally buying as many of these as I can!

So yeah, anyone with more centered boobs, narrower roots, and possibly taller roots that need some projection, this.
I've had a lot of trouble with wide wires and quad boob, this doesn't have those issues at all.

Edit:
I've worn this twice now, and initially it felt great but the gore and side wires have started to dig in so badly that I'm scarring.. yeah, this fast, my skin sucks https://d28qt14g3opchh.cloudfront.net/smileys/icon_sad.gif" alt=":(" /> But that means it's cutting in. Strangely, the band seems appropriate and the wires fit nicely around my boobs, but as I wear it, the wires begin to distort. Possiby from fluctuations thoughout the day? Maybe I need an extender right now? The band did only measure 27-28 inches before wire distortion. Just a bit of a let down because the band gives great support and without it being so snug, I can't imagine it would.

Also, the gore is way too wide and I'm feeling it and it's pretty intense
Honestly, if I could make the band more supportive material and go up to a 32 and then alter the gore and figure out what's going on with the sides, I'd feel like this was perfect again. Such a shame.

Also, I apologize for lack of photos. I've been insanely busy the past few days, but they will come https://d28qt14g3opchh.cloudfront.net/smileys/icon_smile.gif" alt=":)" /> now that I'm having issues I need to post a fit check anyway.


EDIT2:
I finally added photos. Forgive the slight wrinkling. I was taking Spironolactone for, erm, complexion issues, but my dermatologist is miles away and I haven't had a car so..no Spiro=bad skin, no boobs, and basically, I'm beginning to look like a teenage boy (again). Pretty sure I have PCOS or at least high androgen levels. So my boobs have been shrinking and that's also why I haven't been on here much. It's sort of depressing thinking that I finally found some nice bras and now my boobs are losing fullness and becoming even more tubey.
Anyway, this bra actually left scars on my sides from the wires so I haven't worn it more than twice. Still love the shape. Giving it another shot being as there's already permanent scarring so whatever, but I'm not very hopeful.