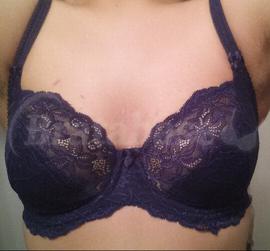 I've been trying to decide whether or not to get this bra for a while now.
My first instinct was of course to try 30E, but after reading reviews, I realized I'd probably be better off with 30F.
So the tight band is amazing. I can swoop and scoop and everything stays put. It's VERY snug-as some users mentioned, which is why I decided to go with the usual 30 band.

A big issue I've been having with 30E's and those that fit like them is that the wire at the gore has been poking into my right boob a lot lately. I think it has something to do with the gore being too wide. I don't have a big problem with that in this, and it may have only been this way because the bra I'd been wearing pokes my boob really badly, but the gore hurt a little bit here too. The gore was actually so bad on the bra I was wearing that it literally cut into my boob though, so it may not have been this bra at all.

The shape this bra gives is incredibly perky(a big reason I looked into buying it). I like it a lot. I also like that the wires aren't super wide.

My biggest problem with this bra is the top part of the cups.
There's a light elastic over the top, which I believe helps create the shape I like, but it also cuts into my tissue and looks awkward on its own. Under a shirt though? No problem.
I'm just wondering if perhaps I should've tried a 30FF. Considering that this seems like a lot of 30E's, and I've been quadding out of a lot of those, maybe that's my problem?
My boobs are tall and one is FoT, the other is about even, so it looks a little awkward. Like almost as if the tissue is being squeezed.
I'm going to post a fit check in a few days, and hopefully get some input as to whether or not I should be sizing up more or if, once again, it's a shape issue. =/