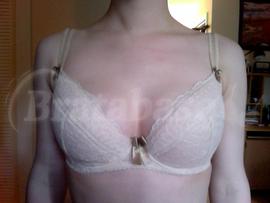 After waiting over two months for my Comexims, they finally arrived! (To my parents address, but that's another story). The band length is perfect! I'm using the first hook with no problems. It's not very stretchy at all; what you see is essentially what you get, which is a good thing in my book. I based my size off of multiple charts and bra bloggers that have similar measurements to me, and it was pretty spot on for just an educated guess. I probably could've done with a cup size up in the Ginger because while the cups don't *really* cut in at the top, if I take a deep breath or pull my shoulders way back, they do. I would say if you're in doubt, go a cup size up in this style. It doesn't really pose a problem though as I wore it all day at work the other day under a t-shirt and didn't notice any unsightly quadboob https://d28qt14g3opchh.cloudfront.net/smileys/icon_smile.gif" alt=":)" />
I do get a fair amount of orange in a glass, somewhat reminiscent of my Marks & Spencer bra that I no longer wear. I wore the Ginger for about 8 or 9 hours the first time I wore it, and did have red itchy marks under my boobs where the bottom of the wires sat. :'( I think I'll just have to be aware of that in the future and not wear it for so long. I also think that it has to be in part due to the plunge style, as the M&S bra that I referenced earlier gave me the same issue and was a plunge. The cup material also scratched where my arm joins my shoulder near my armpit a little bit when I was moving around; I'm hoping this will soften up with a few wears and maybe a wash or two.
The fabric and foam is very very lightweight. I can't tell if it is intentional, or if it just cheap. There is a quiet sort of paper rustling sound sometimes which I find odd (when moving around, putting it on, etc.).
Despite that, the colour is a perfect and oh-so-pretty nude for me! I'm basically as white as a sheet of paper and the colour is a great nude for me-- just something to keep in mind if you have any sort of colour to your skin, this probably won't work as a nude for you. (Not that that's what it's exclusively for; it's still super gorgeous). The wires aren't as narrow as I thought they might be, since I'd heard a lot of people saying Comexim's wires were about as narrow as you could get. They are still narrow and don't cover as much no-tissue area as other bras I have, but then again I have super narrow roots (0 tissue under my arms). It's not a problem, just an observation https://d28qt14g3opchh.cloudfront.net/smileys/icon_smile.gif" alt=":)" />

PS I ordered this bra with 3 hooks & eyes and reduced cups.