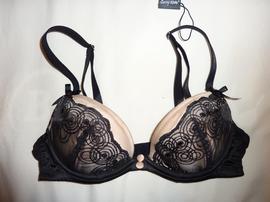 Since this bra has been discontinued for a while, I couldn't find a 28dd for the life of me and so had to settle for a 30D. I've seen many reviews here recommending users go up a cup size, but I'm so shallow that my usual size is plenty good enough.

This is probably because it's a three-part balcony at heart, for all that it's a plunge. Horizontal/diagonal seams tend to end up too deep for me, and even this super shallow bra ended up just right. Unfortunately, this bra is not super well suited for FOT breasts, so it cuts into my tall roots a bit. It fits pretty well otherwise.

The wires are quite short in this bra, and very very solid. I've never felt stiffer wires; I couldn't even bend them! But they fit my root perfectly (as long as I don't over swoop and scoop). The gore is super low, which... I don't know, I don't have any real opinions on it. I do have more fullness in the center, but I'm so shallow overall that it's a non-issue.

The band is pretty stretchy, but overall it's firm enough that I can wear it ok on the second hook. I actually thought I was on the tightest hook when I first wore it, but no, the second hooks are where it ends up when I blindly hook it. This is good. I appreciate a 30-band bra that I don't have to alter right away for a comfy band.

This bra is pretty clearly a manufacturing second though. The stitching on the right cup is super obvious and not very neat along the top edge of the lace. The mesh seam on the left cup is imperfect enough that the vertical seam isn't perfectly flat. Overall, these are only cosmetic issues and the imperfect seam doesn't really show up under tight shirts any more than the lace in general. That is, it does show, but it doesn't stand out specifically.

The gold is actually pretty muted, which I appreciated. It's almost a skin-tone kind of gold, not brightly yellow. As for its design, I find it looks cuter in small cup sizes than in large cup sizes.

It's a pretty darn comfortable bra.