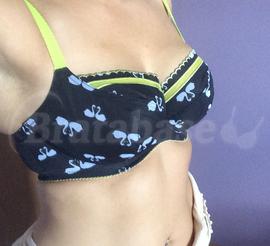 I'm finding lately I'm a 28G or so in molded cups, and a 28FF in most unlined bras. Is it common to be a size down in unlineds? Works the same for the Freya unlined bra I tried vs their padded half cups or Decos. Anyways, I searched high and low for a 28FF swan print and couldn't find it anywhere, and since I wanted to try this bra so bad and was so in love with the swan print, I settled on a sister size and prayed the band would run tight.

Well, it's not a tight band, but I've worn worse. It's on the middle set of hooks. I think the swan print is a love/hate thing - either it's your thing or it's not. I think it's quirky and cute and different.

I really, really, really like this bra. Even though it's not perfect, I like it a million times better than the Lucy, because it's not mesh and not lace and doesn't itch! At all! That's huge for my sensitive skin. I like it enough I've worn it the last two days.

There's wrinkling at the top in my smaller breast and minor quadding in my bigger breast when freshly scooped. I swear that's a problem in every single bra. My right boob would be swimming in a 28G or 30FF though. The quadding goes away as my boob "settles" - someone on ABTF mentioned it could be because I have soft tissue and it's easy to over-scoop tissue into a bra that isn't really breast tissue, and since my tissue is soft it settles down quickly. It made sense.

This is the narrowest cup width I've tried to date, measuring 5.25. It's not uncomfortable, although I feel like maybe the wings and/or wire come up a bit short on my left & bigger side. I took my 5.5" wide Deco off a couple nights ago and took pictures of the wire indentation marks and they're spaced away from where I believe my root is, and also below my IMF, so I really think narrower and more projection is better for me, assuming I've correctly identified my actual root.

When I raise my arm, there's a vertical wrinkle all up the side of the cup, I have no clue why. This is the first bra I've ever owned that brings my boobs to the center and into my frame. It's crazy! It feels like a very uplifted, rounded, centered shape, and it's good enough that I might hunt around for another one.

Underwire length:
Is too short on the side, boobs escape
Top of the cup:
Cuts into breast tissue (quad boob effect)