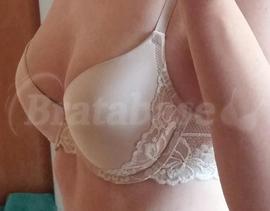 I loved this bra when I first bought it. I should technically probably be wearing a 32 band, but it's not something I can find in most stores around here to even try, so I always go 34C and just wear it on the middle hook (wouldn't know if I'm an actual 32D without trying on). If I remember right, this was a gel padded push-up. Either way, it feels fairly realistic to squeeze/poke, and is super comfortable. I've had it for maybe 3 years now, wearing it at least a few days a week (though maybe only half the day), and it's just now starting to feel at the end of it's support life. But I've also only washed it when needed; sometimes line dried, other times tumble dry no heat. As it wore over time (mostly from washing & drying I assume), the top/inner edge of the cup has started to curl outward a bit from fabric shrinkage (assuming).

It was well worth the $18 I paid for it at the time. I have another one of the same brand, but diff style, which is also comfortable (though doesn't quite fit as nicely in the cups for being the same size of 34C). But I'd definitely gravitate toward their brand again since I feel like I got a great deal with how well it holds up for being a pretty cheap bra.

Seemed to fit appropriately for a 34C.