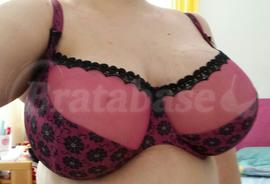 Before I tried this bra I have been avoiding Curvy Kate bras for a long time. I have tried some years ago and all failed on me, gave me a horrible shape and were in general just not supportive enough. They have been changing their bras over the years and after reading some positive reviews I decided to give them another chance. I'm glad I did. It's not the bra-Wonderland for my boobs but the bra is not bad either.
First of all, the shape is much better. I get a round shape from the side. Also the wires are narrower and the top of the cup is roomier compared to old models. I think this bra is also not bad for full on top boobs.

The band of the 36K is a bit too big for me as I measure 34 inch underbust, but it's wearable at the tightest setting. The cups are a bit on the smaller side, the gore tacks but I get the slightest hint of quadboob.
The wires are a perfect width for my average wide boobs and the cups are not too tall. I do think that the straps could be a bit wider, they are a bit uncomfortable as they are.
The material feels soft and I like the print.

But the most interesting thing for me was: the gore is quite low for a bra this size! (for comparison, the gore on 36K Panache Tango is 12.5cm and the gore of the Wonderland is 10cm)
It's the lowest gore I ever had on a 36K bra that is not a plunge. (Not that I own any plunge bras since they don't work for me)... Anyway despite this bra being not my best fit I decided to keep it for the reason that It can serve as some sort of "plunge-bra-substitute".
I don't wear very low cut tops in general but sometimes the gores in the K-cup size range are just too tall to not show. With the Wonderland I can get away with a few lower cut tops and I don't show my bra. Yay for that.

Top of the cup:
Cuts into breast tissue (quad boob effect)
Band fit:
The back of the bra is not at the same level as the front (rides up)