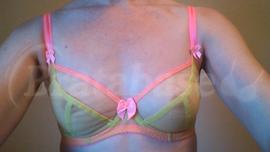 I bought an extender for this bra and have worn it a couple more times. I think I need a 30C in this model. The cups are just a little bit wider than I like them to be and I get a little bit of wrinkling when it's not that time of the month.

This review is for the SS 2015 model of this bra, I think I read somewhere that there have been year-to-year changes.

Tight band alert! I couldn't stretch this to the full 28". If you need a tight band this bra is for you. Today my ribcage is measuring an even 27" and this feels sooooooo tight. I have only worn it for about 10 minutes and it isn't painful, just way more snug than I'm used to. Based on my experience with my old 32A - Claudette » Dessous Mesh Underwire Bra (CD2000), I think the band will relax over time, otherwise I would probably exchange it for a sister-sized 30D.

I would also say that the cups run small. I bought a 28D and a 28DD to try in this bra only because I was seeing really small cup measurements posted on Bratabase. Right now I fit mostly into 30C and 28D bras and I would not have otherwise ordered a 28DD.

I absolutely love the bright yellow and pink. Photos do not do this bra justice. It is traffic-stopping bright neon.

My pictures turned out super weird. I guess my phone camera hates the light in here and for some reason I look blue. Also, the slight cup wrinkling on my smaller side wasn't there after I took the bra off and then put it on again. Huh.

I'm sure I'll have more to say about this as I break it in. You can see how tight it looks, I might pick up an extender.

Bottom of the cup:
Can't quite fill it
Band fit:
I can fasten it, but it feels too tight
Cup's width:
There is empty fabric on the sides (Cup too wide)