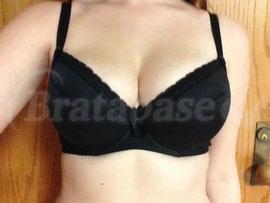 This was my very first foray into Comexim.

I was first attracted to Comexim by seeing some people on /r/abrathatfits sporting the Green Velvet design, then by hearing about their narrow wires. I was pretty wary about buying straight from Poland initially, so I ordered the Basic through Wellfitting, arguing that I needed a new black T-shirt bra.

It arrived and I was thrilled. Sure, the top cut into my breasts, but other than that it seemed to fit okay, and I'd heard it ran a half-cup-size small anyway, and that the other plunges were more open on top. I quickly ordered some more 65Hs (Ingrid and Georgia) from Comexim, only to later realize that the size, 65H, was what was really wrong.

The gore isn't crazy low but decently low, and wonderfully narrow, great for someone with close-set breasts like me. The cups are made of a sturdy black fabric. It looks very functional and sophisticated, eschewing fancy touches for practicality, an every-day bra that keeps a bow on the gore but other than that is strictly, though attractively, functional.

Yes, the top of this bra isn't very FOT-friendly, as it cuts in pretty quickly. But other than that, this bra is so comfortable. I wish I had it in a size or two larger. The best part about it? The wires are narrow, and the straps--oh God, the straps. My biggest bra problem is straps cutting in. None of my Comexim straps, even in this too-small size, cut into my armpits at all. It's beautiful.

Too small, closed on top