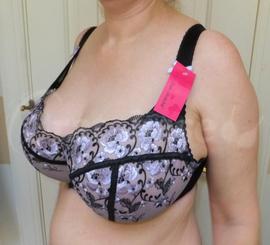 This lovely bra was what convinced me to finally order something from EM. It is so beautiful!

Unfortunately, its only 'ok' on me.

I used EM's sizing calculator (exhaling and pulling tight, as advised elsewhere), and was put in a 70HH. I wrote them, asking for help, and they suggested I try the BM Perla in 70HH, but this bra in a 70J - i thought it was because the SM cut ran smaller than the BM cut, but I think it is more because the materials in this bra are just not stretchy, whereas the Perla's material is.

Which means that this bra is a LITTLE small on me. The stretched band is almost 3 inches smaller than the Perla, but with the extender, the straps still stay on my shoulders, so thats fine (and hopefully I'll find my black extender, those little things are so easy to lose!)

The cups, as mentioned in some other reviews, are shallow and tall. Its not very clear in these pictures, but my larger breast looks a bit squared off in this bra - which is a strangely common problem for me, but apparently extremely rare for other people? There is also loose fabric at the top - more than there was when my Floris was new. However, like the Floris lace, it does not seem to show through, so it seems to be ok.

One thing that really surprised me between the two bras - this SM seems to separate my breasts better, and come higher on me, than the BM. I had assumed the SM would be lower-cut. Of course, it could be in part due to the larger size in this SM - but in my lowest-cut top, the bow of this SM is visible fairly easily (keep in mind, I'm short, everyone looks down on me) - whereas the BM Perla was almost invisible.

I'm hoping the band will stretch some over time . . . but I'm not really confident. This is some really, really firm material. Its one of those mysteries - the bra that I stared at on line for months, imagining how beautiful I'd feel in it, does not make me nearly excited to wear as a more plain bra . . because it doesnt fit as well.

Edit: apparently I had not properly scooped-and-swooped - this bra seems to fit me well now! Hubby says it holds me higher up than some others. and after washing, its not too itchy. Tho the lace under the underwire sometimes gets caught under the cups, and that does hurt.

Top of the cup:
Wrinkles, can't quite fill it
Band fit:
Can't quite fasten the bra (band too small)