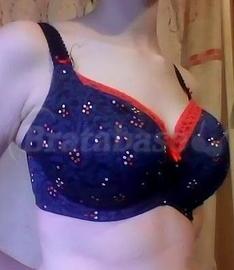 Okay, let me just start off by saying, I absolutely LOVE the shape this bra gives me, especially how it looks under a shirt (I'll probably submit some clothed pictures in just a bit). It's very uplifted and kind of pushed together. Slimming on the sides and filling out the center. It's also a little pointed, which I'm not big on, but it looks so great otherwise that I don't even have a complaint. I have never had a bra give me this nice of a shape. Granted, I haven't had many bras until now that even came close to fitting, but I'm not one to look a gift horse in the mouth https://d28qt14g3opchh.cloudfront.net/smileys/icon_smile.gif" alt=":)" /> Also, this bra is so much cuter in person than pictures show. It's patterned with a very vibrant, deep blue and a nice salmon color that just compliment each other well. Even the back of the bra is patterned prettily.

The band seems very stretchy, although I did get it used, so that could be the reason. For a balcony styled bra, the cups do seem to reach higher than they should, which causes it to gape on me. The wires in the gore are doing this weird thing where they're flipping over each other, but that may be because the gore has been slightly altered. The straps are very comfortable. The bra in general is very comfortable, and all in all I'd say if it's something you think would be good for your shape, then definitely go for it.