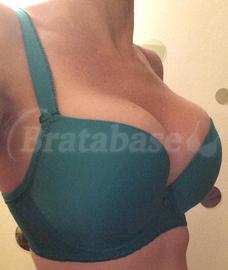 I just love Freya! Though, I'm not so sure how consistent their sizing is. The first time I tried the Honey I still wasn't quite sure what size I was and I bought a 28F. I thought it fit at first, but didn't really know what a proper fit was yet. It felt nice, but was def too small. I had major quad boob, the top of the cups were digging into the top of my boobs. There was lots of spillage going on. Regardless, I instantly fell in love with this bra. I was thinking of maybe going up 2 cup sizes since the F was so small. But I decided to try a 28FF cuz I was more worried it would be too big in the G. I have the Hatty in a 28G and it fits nicely, but I think I could even do a FF in that one as I do I have to readjust throughout the day...not a perfect fit, but fits nonetheless. I also have the Charm and that's a 28FF, fits perfectly.

The Honey in a 28FF does fit but feels very tight! I'm def gonna have to break this thing in a bit. The band is super tight (a good thing for me since I'm 27" in the underbust). I could PROB do a 28G but I don't wanna have to keep scooping n swooping all day. I'm surprised I'm not really quad boobing in the FF since it was so bad in the F. The gore is just the right height, it's not bothering me at all like most do (I usually don't go with anything taller than 1.5-2"). The straps are thick, as usual with the Deco line. The only complaint I have with all of the Decos are the number of hooks and eyes. I really wish there were 3 for DD+ sizes, 2 just doesn't seem to cut it for larger busts. It's still very supportive. But I think it might make it a little more comfy. Guess Freya didn't wanna sacrifice the daintiness of this bra with 3 hooks and eyes.

I originally had the Topaz colorway in the 28F...SO SO PRETTY! And I really wanted the same color again but couldn't find one anywhere in a 28 band that was under $50! So, I settled for the Jade colorway this time. I'm not a fan of green at all, but this is the prettiest shade of green I've ever seen, so I'm actually happy about that now https://d28qt14g3opchh.cloudfront.net/smileys/icon_smile.gif" alt=":)" /> Oh, and the one thing I remember from before when I had this bra....it squeaks!!!! Lol, hopefully, it'll stop squeaking with wear.

But overall, LOVE the Honey!! It comes second to my Charm. Even tho they're the same size, both in the Deco line, they don't seem to fit quite the same. I think my Charm is a better fit than the Honey. But I still love them both! The Honey gives an amazing lift and it looks fantastic under clothes! Of course, I do get that infamous line showing thru from the top of the cup/ lip. I think if you're a little fuller on top it tends to push the edge of the cups out causing this line. Somehow, the laced trim edge on the Charm alleviates this problem. The cleavage is nice, too, on both https://d28qt14g3opchh.cloudfront.net/smileys/icon_smile.gif" alt=":)" /> I highly recommend this bra!! So happy I have it now in the right size!