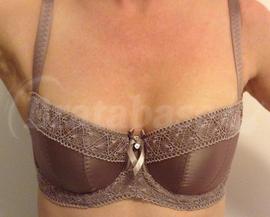 This bra puzzles me. It looks gorgeous, so much so I wonder if I'm talking myself into thinking it fits - I especially love the bow and the little charm in the centre. The straps are quite wide-set, not a problem for me as I don't have especially narrow shoulders, but could be for some. The underwires are a bit too wide on my narrow roots, but they're wearable and not especially uncomfortable. The cups on the Rhea are made deliberately shallow on the bottom so they push you inward and upward, allowing for a lot of upper fullness. The band and straps are very firm - it's not so much that they're particularly tight, but that they don't have a lot of stretch, which means they don't adjust with your movements in the way they would if they were more elasticated. For this reason it's not the most comfortable bra I've ever owned, though it might become more comfortable as I wear it in.

Fit-wise I'm still trying to figure this one out! I got this bra in a cup size down from my usual size, not through choice but because 28E wasn't available. I think it may be technically too small on my larger left boob, as I get slight quadding and my breast extends slightly beyond the line of the cup; however because the tops of the cups are so open the bra is still wearable in this size. I'm still trying to work out if I'm filling the bottom of the cups - it's really hard to tell because the fabric is so stiff, but I think on my larger boob there may be a bit of space there, based on the marks left by the underwires. But I'm not 100% sure. So although I've marked this bra as fitting I actually don't quite know how to judge whether it fits or not - the style is so different to anything I've tried before! I've ordered a 30DD as a comparison, which will hopefully give me a bit more information to go on.

I do think the bra looks really nice when worn and gives decent Marie Antoinette cleavage, especially considering I'm small-busted. The problem comes when I'm trying to decide what on earth to wear over the top of it. Because of the inward and upward style of the bra, the shape from the side is a little bit minimised, and the lace seams are also pretty visible through clothing. So while it's flattering without clothes, when worn under clothes the shape - at least in my size range - is less impressive. Ideally I'd want a shirt with a very low-cut, square neckline, which would show off the cakes-on-a-plate cleavage. At the moment I don't own such a shirt, but the bra is so pretty it may be worth keeping it and then looking for something to wear with it. Or I could just wear it without clothes. Either way.