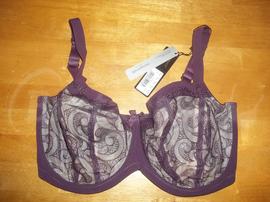 had this bra for about 2 weeks now and kept forgetting to enter it in and return it, oops! ordered 2 sizes on amazon to see if either would work since both were cheap and returnable, and neither did. i think i will have to up and admit defeat on orla https://d28qt14g3opchh.cloudfront.net/smileys/icon_sad.gif" alt=":(" /> as pretty as it is, it seems like it will never work for me.

first things first: DAMN. this band is tight! it *just* goes to 32, and i needed a full extender to even get it on. even with the extender, it was very snug, and the gore dug in painfully. this is probably partly due to the height, and party to the tightness. i would suggest ordering a band size up from whatever you wear, at least one.

its hard to gauge everything else because of how poorly the band fit, because using the extender skewed the straps so far. even in the right band size, the straps on orla are *very* wide. the cups gapes a little on me here, but im guessing more so because of the band having to be made so much longer by the extender. the cups are 6 inches wide in this size, which is a bit too wide for me. appearance wise, the plum color is gorgeous.

Center gore comfort:
Underwires dig into sternum, because they are too high
Strap separation:
Are too far apart
Top of the cup:
Wrinkles, can't quite fill it
Band fit:
Can't quite fasten the bra (band too small)