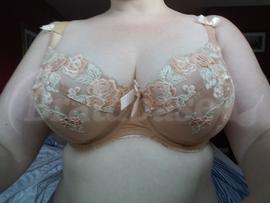 I wish I understood why my breasts love the S and not the SM. I don't think it's just seamed vs. padding. Something is going on with the fundamental shape.

Ewa gets a lot of credit for her deep cups, and overall that's accurate, but I think compared to a bra with similar measurements (say, my 32FF Panache Jasmine, with the same cup width and depth but a taller gore), there is a...steeper cup? It's not exactly less projection right at the wire so much as a higher horizontal seam, so that more of the cup is "bottom" and less "top," which gives the illusion that my breasts aren't full enough on top to fill it. Except that's laughable if you look at literally ANY of my other bra photos.

This bra also lacks center fullness. As with Comexim plunges, my nipples are lying way closer to my sternum than the cup of the bra wants them to. But if I were to go up a cup size to get more depth, these straps would be off my shoulders, onto my upper arms.

CHPs continue to be my gold standard bra (though I'm once again between sizes). I am going to try an SF or BM next, once I scrape up the patience and funds.

Strap separation:
Are too far apart
Top of the cup:
Wrinkles, can't quite fill it