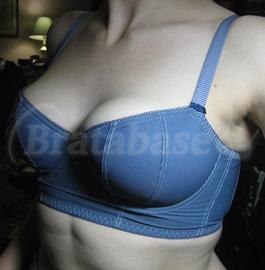 This bra is much tighter than other longlines I've worn. It's snug everywhere. I like the snugness, but at times it irritates me after wearing it all day. The 'boning', while by no means heavy, usually digs in by the end. The underwires also dig into my rib cage under my breasts.

Initially this bra was incredibly painful in the gore. The person who owned it before me bent the wires, and I bent them out further. The gore still has the appearance of sitting on my sternum without the agony.

The shape from this bra is very round. There are lines going down the cups that are sometimes visible through clothing, but not to the extent of other longlines. The colour is delightful - two shades of blue pinstripes that together appear periwinkle, and yellowed wooden buttons for contrast.