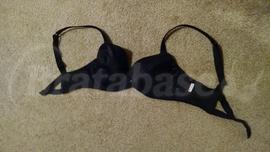 I really like the cut of this bra so I found one in 30DD instead of a 28 band since the wires are so firm that I can't hardly wear the 28E I have without an extender.
It seems like this bra's band is significantly larger than the 28 band; it's still tight for a 30 band, but looks like it's 2 band sizes bigger than the 28 band that I have.
Overall, It's very comfy and has a nice understated profile when wearing it, which I really like. I could stand to go up in the cup size, and wish that the straps were like half an inch closer together, all in all though this bra is a really good fit and is very comfortable!