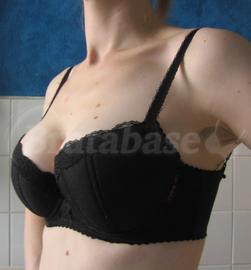 I bought this bra almost 2 years ago… I usually wear 65e in HP but this model was very hard to find in my size, so I didn’t think twice when I found this occasion. I thought that altering the band would be necessary but it’s actually very tight and wouldn’t need any band alteration if I wasn’t facing a cup and band compatibility problem.
The cups aren’t exactly the same like in newer HP (if my memory serves me right, HP Czarny, Fuksja and Turkus were the first HP cuts). The difference lies in a longer distance between the place where the strap is sewed into the cup and the cup end, the cup volume stays the same though. In addition to that, the band is not perfect for my torso shape: the lower band is firm enough but the upper part is just too loose which causes a kind of “pockets” under my armpits and in the cups (just between the strap and the cup end, it still can be seen on the front view). Like many other EM bras, this one was designed for someone with a \ / back while mine is more | |.
I'm sure that a smaller cup would resolve all these issues and I wouldn’t need to do any alterations, but 70d or 65dd was hard to find.
I first decided to alter the band between the cup and the strap – I took the band in in its upper part on each side. The cup fit was much better but the band became too tight and the underwires were hurting me under the armpits. The alteration was reversible so I tried to take the band in elsewhere https://d28qt14g3opchh.cloudfront.net/smileys/icon_wink.gif" alt=";)" /> I cut off a thin part of the band between the closure and the strap on each side and thereby shortened the upper part of the band. The result can be seen on the photos. There still are little pockets in the cups, but the band fit is much more comfortable. For a perfect fit, I still would need to take the band in under the armpits. After the alteration, the band fit is ok on the first or the second hook, just like before the alteration. I actually think it didn’t affect the band measurements since I just cut the excess band off.