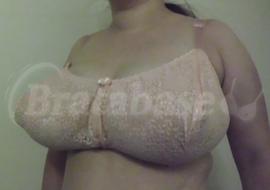 This is my second attempt at sewing a bra, and my first attempt at using a self-drafted pattern. Basically, this was designed to be a test of my basic pattern to check the fit and comfort. The sizing is a best guess based on the stretched length of the band, and the fact that my pattern was based off the size 19 cup on Foundations Revealed, indicated to be the same as 28:19/30:18/32:17 etc.

This bra is wireless, and the band is a height which may possibly get the name longline from some companies, but this is by virtue of the fact that it has garment elastic on the lower hem instead of the usual blush hem elastic (the stuff you normally get on bras with the scalloped edges). Most of the materials are from a bra kit I purchased. The cups and cradle are made of a layer of apricot stretch lace and a layer of white non-stretch stabilising lining. The wings are made from two layers of powernet. The bra fastens with 4 rows of 3 columns of hooks and the straps are fully adjustable.

The aesthetics of the kit tend to very feminine, but I think that I'd not mind buying a bra in apricot lace anyway. The apricot seems to be close enough to actually being a nude colour on my warm-toned fair skin. The kit was rated for 40DD-48C, and I had more than enough powernet to cut out two sets of wings with the extra hem for the elastic, but I wouldn't really want to make a much larger cup from the amount of cup materials provided. I feel like the bow included was ludicrously small (and I'm contemplating getting something else to put on the gore which won't look pointlessly tiny), but the size range it was designed for may not have this particular issue. A small complaint I'd have for these materials is that while the straps are nice and thick, firm and stable, the elastic designed for edging the bra isn't nearly as strong as the straps, so it's really stretched out in order for the straps to provide any lift. As there was heaps of strap, and I had to trim some off, I'd contemplate maybe using that instead to edge the upper part of the wing which extends down to the clasps if I was to use a similar kit in the future.

The basic pattern design came from the series of articles on Foundations Revealed, which show how to grade a bra block and also how to create a variety of styles of bras. If you have any interest in drafting your own bra patterns, I'd say this is an excellent resource.

I chose to go for a 2-piece cup with a vertical seam as I wanted it to be easy to make changes to the fit if required. This design choice is responsible for the super pointy/retro shape that the final product has. My husband hates it. I actually don't mind, and I think that if I had proper fitted non-stretch clothing (difficult to get if your bust is too large for full bust clothing :/), that this would look more uplifted than bizaare. Maybe a 50s style blouse or dress can be a future sewing project.

My pattern (of which I'd done a couple of cup mock-ups first to make alterations) seems to have provided a good fit. The only issue I had was that despite having thought I'd accounted for it, my breasts were too short for the original cups, so I ended up trimming a bit off the top of the cup. To give some sort of frame of reference, the cup is about 40cm deep around the deepest part, but vertical depth of the cup (length of the cup seam) is only 31.5 cm. This is actually the explanation of a lot of my fit problems with RTW bras. The wings are the right length and the cradle is a good fit.

The garment elastic on the bottom of the bra seems to have been a really good move, as unlike other wireless bras I've tried, it doesn't try to fold under and dig in from the weight of my breasts. The tradeoff is that it wasn't really possible to get equal tensioning on the top and bottom of the bra, and that plus the fact that there are no wires to provide stability throughout the wing (I played with boning the wings, but plastic boning just seemed to want to curl up like the wings do), means the upper part of the wing is a bit saggy. There's a small weird floaty bit between the cups, as they're cut so that they should fit when sitting flat, but obviously won't do that without wires, but the bra does sit flat at the top and bottom owing to the elastic. I think that's just going to be one of those things with wireless bras.

The stitching isn't perfect, but there's nothing too obviously wonky. I don't know if I'd feel happy selling a bra of this quality to someone else (I don't know if anyone would even want a super pointy cup like this, I realise they aren't the fashionable shape), but it's nice enough to wear.

Overall, this bra seems to be a good fit and very comfortable. I think it may get a bit of love as a house bra unless it causes my husband to take too many hits to his sanity score.

If I was to make a bra just like this again, I think I'd play with the relationship between the inner and outer cup a little to see if I can get a slightly more centred look for my breasts, instead of the faintly outward pointing shape with the almost flat plane on the outside. I also wouldn't use straight stitch on the casing for the elastic (oops!) as the garment isn't gathered but stretch. A short zig-zag would be a lot better if I want to include this feature.

Edit: Much to my devastation, after a couple of washes, the band in this bra has stretched phenomenally out to about 80cm stretched length, making it unwearably long. The wings are very short so I'm not sure if it will be possible to take in the band without ruining the shape of the bra. I'm guessing it must be something to do with the materials used. I may need to investigate some sturdier options for next time or aggressively prewash my fabric.