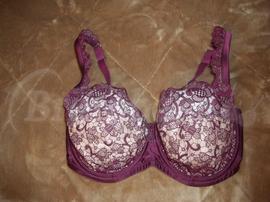 **UPDATE** wore it for 2 days, and i notice severe gaping in the top half of the R cup where im shallower and wider. visible through shirts and makes me feel very unsupported, so i think i might actually need to alter it before i can put it in my rotation. part of the issue is probably that the apex of most cups is too high for me, my nipple is lower set than they require.

onto the details! i have a tall breast shape, with narrow roots and breast tissue that goes up very high. i have projection that is somewhat shallow (but most shallow friendly bras are too shallow) and almost no upper fullness, so that combination means most balconnetes both gape in the top section but cut in along the top edge.

in any case, the shape and construction is such that, unlike most balconnete shape bras, this one nearly fits! i still do have some gaping in the top section and i can pinch maybe an inch or so of extra fabric. the top edge of the cup presses in but the structure and height of the top edge makes it less noticeable or severe as i get in Cleo type balconettes. neither feel uncomfortable or look noticeable under clothes for once, so im going to call it wearable. ideally i would be able to alter this some way, but for now its good.

im inclined to think the cups run shallow because of the fact that there isn't nearly as much empty space in the upper half of the cup as im used to getting in other balconnetes, but im awful at that sort of assessment so take it with a grain of salt.

the wires on this are NARROW. for me its awesome! ive been trying to find a bra with a 5.5 inch wire width in my size and this is one of the only ones so far. i may seek out more colors and just deal with the shape issues or attempt alterations.

the band on this is made of a satin type material, and its quite firm. i dont think its a type of fabric that ever "breaks in". im between a 34 and 32 band right now, and im wearing this with an extender on the second hook. im okay if this is how i will always have to wear it, and i think the 34F band would be too large.

the straps are only partially adjustable, so that might be an issue for some. the lace on the front half of the straps is a bit itchy, but that may soften with more use. BUT, they arent super far apart which is a total blessing. every other balconnete ive tried has sawed my arms off!

the gore is quite high for me and might be the only part of this that is truly uncomfortable. there is some extra wire channel near the underarm that i may try to shove it into to see if that helps.

im sad to hear rumors of masquerade discontinuing when ive finally found success! hopefully they come out with a shape like the Persia again. i'd love to have it in nudes or a non lace material.

Strap separation:
Not a problem
Top of the cup:
Cuts into breast tissue (quad boob effect)
Band fit:
I can fasten it, but it feels too tight