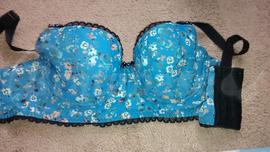 Really pretty bra, probably my favorite one I own. I was so excited to find the very last one hidden in the bottom row of clearance at Nordstrom Rack in my size.

The cups are lined just enough that they hide nipples while still being flexible like soft cups. It gives me a nice rounded shape and a little cleavage.

Interestingly, unlike what other reviewers are saying, mine does have three rows of hooks. I'm not sure why there would be different numbers of hooks, but it doesn't seem to be related to size. My only guess is that Freya started making them with three rows later on. If you're ordering this online and the number of rows is important to you, make sure you ask before buying, because it looks like it could turn out either way.

The most annoying problem with this bra is in the bottom of the band - it cuts into my five-months-pregnant belly and flips up, making it feel annoyingly tight. I mostly fixed it (for now) by using two extenders: one on the bottom two hooks fastened in the middle row and one on the middle two hooks fastened on the tightest row. Then I just fasten the top two hooks normally on the loosest row. I've seen a lot of people mention this flipping problem, so I guess it's a common issue. Hopefully this can help someone!

One thing I don't really understand is that when I take it off, the marks from the underwires are pretty far below where my breasts actually are. But when I'm wearing it, it doesn't look or feel like there's empty space at the bottom at all. Not a huge issue, so I'll probably just ignore it for now. I'd be interested to know why this happens, though.

Overall, I love it, and will definitely keep an eye out for more good deals on Freya longlines.

Underwire length:
Runs too high under the arm, it pokes
Top of the cup:
Cuts into breast tissue (quad boob effect)

Fits well, but a little tight at the bottom of the band (pregnant)