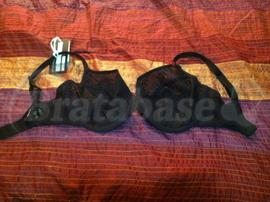 So close. I've tried the 28G, 28H, and 28GG in this one in addition to the 30G (one of the first three was a balconette rather than a plunge). Of the four, I think I'm going to have to recommend the 28GG as the best fit. The band is pretty tight at a 28GG but it is most supportive because of the band.

This one, the 30G, is a good fit on the cup size (although a cup size higher than my natural size - 28G) but too big on the band. The back of the band rides up and I noticed the wire lines after trying to wear it were below the bottom of my breasts after a few hours.

I like this bra a lot visually and as far as material is concerned. It's just a beast for me to nail down in size and to keep the gore from digging in.

The one thing I might find to be a better fit (slightly) would specifically be a 28GG in the balconette style (which has a higher gore). I have a lot of issues with the wires poking into my ribs where they attach to my sternum. One typical solution to that is to go with a lower gore, but the higher gore might actually be better here.

Center gore comfort:
Underwires dig into sternum, because they are too low
Strap separation:
Not a problem