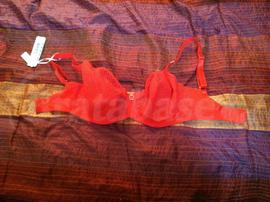 Just received this in the mail.

As of trying it on and wearing it briefly, I'm not in love with the color (crimson apparently equals orange red at Freya). However, the general fit is pretty good. The band is a pretty tight 28, but comfortable unlike the tightness of Panache's Tango. The cups fit well unless I take a really deep breath, at which point they quadboob a little. (I think this is probably a sign that I still ought to be leaning towards FoT rather than FoB, though I'm fairly even.) Even with that, I think it is going to be a keeper.

Edit: I'm pretty hesitant on keeping this now, actually. After trying it out for just a little longer, the gore started to really hurt on me. It digs in not at the top of the gore, but rather just before the wire curves under my right breast (right where my ribs connects to my sternum and sticks out a bit). Not sure if there is much I can do about that except add padding there. Or perhaps try it in a higher band. I hesitate to go in the direction of a 30FF, but either that or a 30G might work.

Center gore comfort:
Underwires dig into sternum, because they are too high
Strap separation:
Not a problem
Band fit:
I can fasten it, but it feels too tight