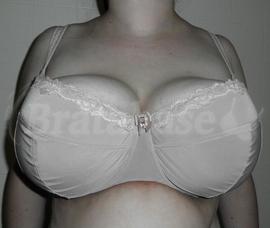 Another lovely S cut bra from Ewa Michalak. The bra in this size has a cup made of 4 parts, with partially adjustable straps, and fastens with 3 rows of 4 columns of hooks. The straps are half made of the lightly padded foam which makes up the bra cup, and the rest is a regular strap (similar to that used on the SM Bezyk).

The colour is described as cocoa beige on the site, and I think it would be nude on someone with a cool skin tone. It's a bit of a mismatch on my warm fair skin, but it's not especially noticeable under a shirt. What does show up is the lace decoration on the top of the cup. It's only been sewn on one side, and so it can flip up during wear. It also is a much lighter colour than the rest of the bra. I may just take the lace off if it bothers me too much. It does add an extra touch to the bra which is quite nice, but it isn't very practical for a bra which I bought to wear under light coloured clothing. I like the overall appearance, but I'd choose something a bit plainer for a nude bra personally.

The bra cups are just a bit too tall under my arms to be comfortable, and while the straps are very comfortable to wear with the light padding, they're just a bit too long to take up the slack of the too tall cups. They're also rather wide set, which is pretty common amongst all EM bras I've tried. The band is too long, but I ordered off the dropdown with the intention of taking in the bra. I normally wear a 28 band in UK brands, and if I could readily get them, I'd most likely opt for a 60 band in EM, as I like (and require) a firm band to hold my breasts in place. The cups are both too shallow and too tall, but probably the best balance between the two, owing to my large disparity (I've worked out that in EM I need the height of a 60K and the depth of a 60M or comparable volumes, so this is in the middle).

Edit: I ended up taking the lace off the top of the cups, which was a fairly easy 15 minutes with an unpicker and made the bra a lot more low-key under tops. With band alterations, the straps were more centred and the band was more comfortable. I'm basically always happy with the durability of EM bras and this is no exception, still able to be worn on the loosest hook (post alteration) after several months of wear. The cups are too shallow, and so the wires dig in a bit with wear, but with my sizing dilemma, I didn't mind this as an uplift/cleavage bra until my breasts grew again, firmly sizing me out of this bra even without scooping.

Center gore placement:
Doesn't lie flat against sternum
Bottom of the cup:
Can't quite fill it
Top of the cup:
Cuts into breast tissue (quad boob effect)
Cups separation:
Too separate for my boobs
Band fit:
The back of the bra is not at the same level as the front (rides up)
Cup's width:
There is empty fabric on the sides (Cup too wide)
Strap separation:
Are too far apart
Straps adjustment:
Straps don't adjust short enough

Center gore placement:
Doesn't lie flat against sternum
Bottom of the cup:
Can't quite fill it
Top of the cup:
Cuts into breast tissue (quad boob effect)
Cups separation:
Too separate for my boobs
Band fit:
The back of the bra is not at the same level as the front (rides up)
Cup's width:
There is empty fabric on the sides (Cup too wide)
Strap separation:
Are too far apart