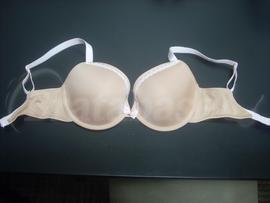 November 2015: Still doesn't fit. Definitely would be too small in the cups now.


Original 2014 Review: (Pictures soon, then maybe this review can be a bit shorter!)

In good news, I finally tried on a 28E!!!! It only took, like, over a year! To start, I absolutely love wearing a 28 band. The cups are the right width and the band keeps the wires in place under my arms.

In bad news, sadly, I don't think I can keep this bra. It's not the right shape and hurts a bit after wearing it only twice. Maybe it's because I'm not used to a 28 band, maybe it's because the band only connects at the sides rather than goes under the wires, maybe because I finally am wearing it at the correct height, maybe because I slouch. Any way, the wires dig into my ribs after several hours. I don't think they're sitting on breast tissue, but the cups don't fit right so maybe.

From reading the measurements online, I figured that the cup volume would be a little big, but I should have believed the reviews. (I've never worn a 28E before so I didn't even know if it was my true, recommended size.) It's definitely not the correct shape. I'm not sure if it's the right size or if I need a 28F because it fit perfectly in the underarms but cut in. It wasn't quite quadboob, it was more like the cup curved back in too fast. There is a slight bubble not firmly filled directly above my apex, yet the top of the cup cuts in, so again I think it could be the right size but definitely not the right shape.

I have wide roots with tissue that goes up really high on my chest, shallow/medium projection with a slight conical shape, and I think somewhere balanced and full-on-top. My root tissue touches at my sternum, but my breasts are still wide, so they "east-west." This cup seems better fit for medium width tissue (not really narrow or wide) that doesn't travel very far up the chest, and is more full-on-bottom so that the cups won't cut in in the top.

I really like the look of this bra. It has a tiny gore with close together wires (which I really like and need) and although the wires don't go up too high in the armpits, it's tight so my tissue doesn't slide out. The lace trim and bow are really cute, and I like that the straps are scallop-edged and match the color of the lace details.

One of the bad things appearance-wise is that the bra makes my breasts look a bit ski-slope-ish, (again, not a good shape on me). I also have an issue with the band. The material is not nearly as supportive as the elastics that border the edges, so the elastics dig in and there's a very unattractive bulge between the elastics where the fabric stretches more. The straps are a bit too wide so I have to tighten them to keep them from slipping off, which causes them to dig into the front of my armpits after a couple of hours.

I'll probably have to put it back in the listings because after only 2 short wears, it's a bit uncomfortable. Hopefully it will find its home soon and I can actually buy a bra that fits!!