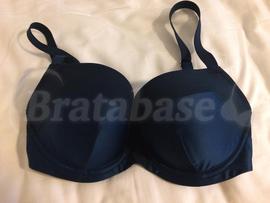 I LOVE this bra. It is so pretty, the material feels great, and it gives me a beautiful shape. The band is definitely on the tight side, so I would probably suggest sizing up unless you're like me and like really tight bands; I think a 28 band in this would be really good for someone who needs 26s. I also measure in the middle of 28E/F, so if you're somewhat in between cup sizes like I am, I suggest going with your larger size. The gore is quite pokey which I guess isn't super surprising considering that something their sister brand Cleo is known for.

Edit: After wearing it a few more times I've come to realize that the band is very tight, even too tight for me; I could barely wear it for an hour each time I tried. It also doesn't have enough immediate projection for me so if you often have a problem with that then I might skip on this one. It's unfortunate because like I said, it's a very pretty bra and gives a great shape.