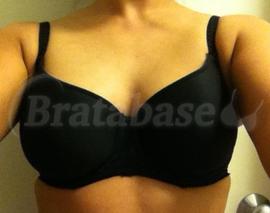 Band: As someone whose comfortable rib measurement is 28 inches, I wish Fantasie Rebecca came in a 28 band. I've had to wear it on the closest setting from the very beginning. Initially I was worried that I would be able to wear this bra for very long, but fortunately, it is a very high quality bra with a band that hasn't stretched out much in nearly 7 months. I can put an entire hand and stretch out a bit more nonetheless. I might consider altering the band because a tighter fit would make me feel a lot more secure.

Wing height: As someone who has a lot of breast tissue beneath the arm pits and back, it would have been nice if the band were taller. The wing height itself is fine right by the underwire, but as it graduates down as it wraps toward the back, I find at least a good inch of tissue that could have benefited from being captured within the bra.

Shoulder straps: The shoulder straps are fantastic, very sturdy and comfortable, and strong. They adjust the whole length, do not dig in, and do not stretch out.

Underwire width: My breasts are wide but do not project so much. The underwire is wide enough to completely encapsulate the breast tissue, which is all the more important since the wings are too short and the band a little loose to contain the breast tissue.

Cup depth: I am a little shallow on top, so I was worried about gapping. Fortunately, the straps and the spacer bra do a great job of providing support and conforming to the breast shape. Hence, a great t-shirt bra. A very functional bra.

Center gore: It rests nicely flat for the most part although I am aware that the gore rises very high and at times feels as if it's digging into my breast tissue since my breasts are closely set.

Fit under T-shirts: Great. Very smooth. No gapping. Gently rounded contour, that is, not artificially semi-circular, but very full and rounded.

Overall, I liked it enough that I just purchase two more in the same size.