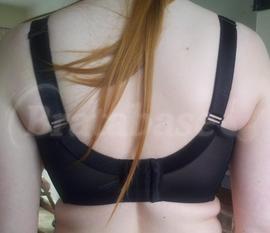 This bra is looooovely, it feels really supportive, very much like sexy scaffolding. The wires don't feel too wide on me, I think because they don't get warped when the band stretches, so they're pretty mid-width. I'd prefer a touch narrower, but they don't dig or irritate due to the width. The band is a bit big on me (I think I'm about a 30K in most bras now) but it doesn't ride up much, I think due to how wonderfully wide the four-hook band is.

I have fairly even upper/lower fullness and it works well for me on that count, but from what I gather it isn't the best for very full-on-top, so I think it's more a bra for in between or full-on-bottom breasts. It isn't particularly deep or shallow, it feels more mid-depth all over, which means I have slight overspill towards the centre and some empty space at the straps (I'm more centre heavy). The gore is quite tall, so it lifts very slightly due to me being close-set, and I get a bit of empty space at the bottom. I don't think this is a depth thing, I think it's down to the main issue with this bra - the very tall sides. I don't think I've owned a bra so tall at the sides before, though it doesn't dig so much as slightly irritate and get pushed down.

I'm a UK 14-16 in clothes (medium in Freya briefs, 40 in Ewa Michalak, 16-18 in Curvy Kate.) and I found the XL high waist briefs to be a good fit, if anyone was considering getting the full set. It's a lovely set, I think I will keep it, though I might have to see if it's possible to lower the armhole.

Recently, the lingerie world has been buzzing after a certain announcement from Parfait by Affinitas. Until now they have stocked 30-40 D-G, but in June they announced that they would be expanding ...

Center gore placement:
Doesn't lie flat against sternum
Underwire length:
Runs too high under the arm, it pokes
Band fit:
The back of the bra is not at the same level as the front (rides up)
Strap separation:
Not a problem

Center gore placement:
Doesn't lie flat against sternum
Underwire length:
Runs too high under the arm, it pokes
Band fit:
The back of the bra is not at the same level as the front (rides up)
Strap separation:
Not a problem