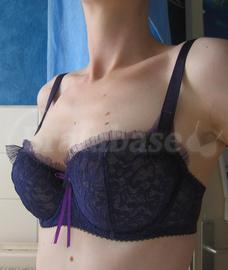 My bust shrank a little even if it didn’t affect my measurements. My Cleo Meg in 30DD fits perfectly now. That was a great occasion to use my gift card and try something new, like french brands. I’ve always thought that french brands are made of beautiful materials but don’t afford a great support. I first tried Chantelle unpadded half cups which are very beautiful indeed but the construction leaves a lot to be desired – the wires are way too soft and the shape they give is weird (70D/85D/32D was the best fit) – but I have to admit that the design is absolutely stunning, it’s really hard to resist.
Then I saw that Aubade does unpadded half cups with a full band which start at 65 and go up to the F cup (which should be equivalent to the british E cup). The store where I bought it doesn’t sell 65 bands so I decided to buy the 70D and alter it (the photos were taken before the alteration). I tried 3 models – Idylle Parisienne half cup in 70D and 70E (the fit in 70E was very similar to the 70D, the cups were just a little higher), Jardin des Délices Half Cup in 70D and Conte Russe Balcony in 70D which fitted surprisingly good despite of the delicate cup material. I hesitated between Reine des Glaces and Idylle Parisienne, my choice was based on the shape, I find that this one supports my breast better.

Me general impressions concerning the brand:

- The straps are very generous, they were too long in 70E, and almost too long in 70D! They’re also quite wide, I wouldn’t expect it from a french bra.

- The wires are a nice compromise between the wires firm enough to maintain and support the boobs and give a nice shape, and the wires soft enough to not feel them despite of a very high center gore. At this moment, the wires are a little bit too narrow, but I think they’ll be perfect once the bra is altered.

- Unpadded half cups (this construction is actually called “basket” in french) have not only a beautiful design but also a great construction. I’m really surprised with the support and the shape this bra provides. In Chantelle bras some parts on the cups were wrinkling even if the cups were too small. I don’t have this problem with Aubade.

- The models with the straps attached perpendicularly to the cups (like in Masquerade Antoinette and not like in EM HM bras) don’t fit my breast, I get a strange shape under the armpit and it’s not comfortable. The straps in these models are also thinner and uncomfortable.

- In the back, the straps are also attached perpendicularly to the band.

My next purchase will be a 65E(80E) and Reine des Glaces will be altered by a professional, I’m afraid I could damage such a beautiful bra.

The bra is now altered. I asked to cut off 3cm of the band on each side, next to the closure, and to move the straps by 3cm on each side too.

Needless to say that the alteration affected considerably the fit. It’s easier now too say something more about the comfort and the fit:

- I can wear the bra fastened on the first (loosest) hook now. The band is very comfortable, quite stretchy to not to feel it while wearing but quite firm to offer a good support. I'm not sure though if the 80E (30DD) would not be too loose for me, it seems that Aubade runs quite loose in the band.

- The straps seem much shorter now the band is supporting the breast weight. My only complaint is about the front part of the straps which is not stretchy, I don’t really like this type of straps because it put pressure on my shoulders and the sides of the cups under the armpits.

- The underwires are almost too narrow for me, but still wearable.

Strap separation:
Not a problem
Band fit:
The back of the bra is not at the same level as the front (rides up)