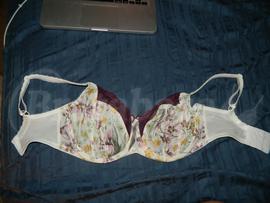 So if you're like me and in between sizes, this bra will be great for you. I currently measure 29" underbust, and that's exactly how much this bra stretches too. I actually have to wear it on the tightest hook on most days though because I started it looser and it would slide down my chest not long after I put it on.

So far it's mostly comfy, but the bottom band rolls up under the bra, which is weird. Never ran into that before. I also found that the straps were much too long, but that with a bit of work, I managed to slide the clip over the thick strap and shorten it perfectly. Hooray.

It's very pretty and flattering on. It doesn't make me too projected, but I don't mind (in general, I prefer to be forward projected like I am in Ewa's and Comexim). I really like the burgundy lace-it's very soft and very pretty. Unlike any other similar laces, I found it to fit me perfectly. Usually they cut into the top of my breast (ahem, Cleo bras), but this one doesn't. Very happy with this bra.