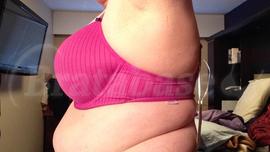 The band feels too tight. Maybe that is just because I normally wear a 42, but I don't like this feeling. The band rolls up when I move, around my rolls, but the bra doesn't actually move. The wires feel like it is poking in on the sides, and my fat is pushed into my armpits, causing uncomfortable rubbing. When I first put the bra on, my breast tissue was spilling out the cups, slightly, but as I moved around, the fat readjusted ( I think it really is fat, not breast tissue) so it was bulging under my arms instead. This is one of the only underwire bras I have ever put on that didn't feel like the wires were poking into my ribs when I bend over. The pictures look like the straps cut into my shoulders, but they do not, I actually have ruts on top of my shoulders if I am not wearing a bra, the straps are comfortable except in my armpits