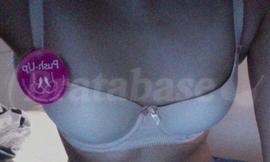 This was probably the worst fitting bra I have ever tried on in my life. Ok maybe not that, but I had high expectations because was hoping it would work under my (non-strapless) wedding dress. (Yeah, I'm one of the rare women that hates dresses without straps.)

It's a wild understatement to say that this stabbed into my sternum. It poked inwards so viciously that I was convinced that it would break skin if I didn't take it off immediately. Literally stabbed through the heart. OUCH.

Otherwise the body of the cups was OK. However there some gapping along the top, and it didn't really work as pushup, further suggesting the cup was too large. Somehow, this bra is looser in the band than any of my 30D bras - the tightest setting worked with some riding up my back.

The final nail in the coffin is that the "nude" would be more accurately described as ivory. I'd say this would work as a nude bra only on the most untanned of pale people. I guess I should have expected this from a British brand.

EDIT: OK, for some really weird reason it fit me a whole lot better the second time around, when I was trying to decide whether it goes to the UPS store. The trick is to move the underwires around from the center to the side. Now, there's no stabbing, zero gapping if I stand straight (there's some gapping as I lean forward), and it pushes up right. I'm on the fence about whether it's the right level of pushup for a wedding - I have a feeling this look could get me kicked out of church. (My sister summarized this look as "No %^&* way is that natural.") It's still REALLY pale, though.

Center gore comfort:
Underwires dig into sternum, because they are too high
Center gore placement:
Doesn't lie flat against sternum
Top of the cup:
Wrinkles, can't quite fill it
Band fit:
The back of the bra is not at the same level as the front (rides up)
Strap separation:
Not a problem