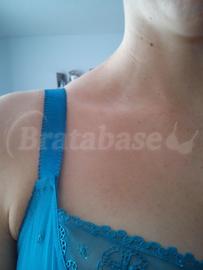 Tried a 30H because I was told the wires looked distorted in the 28HH Cleo Marcie I tried from too small a band. Also heard that Cleo run quite tight in their unpadded bras. I also wanted to see if the wires would be better a larger band.

Sadly, the wires are still very wide (please stop pattern grading Cleo!) but not enough to make the cups collapse as in the 28HH which is great news. The wires are quite soft and flexible and I would normally prefer something much firmer to contain tissue. Moreover, while the straps are a little wide on my shoulders, it isn't too uncomfortable (or, at least, I've had worse) and the straps are soft underneath. The profile is wonderful and a typical round, uplifted Cleo look. The lace is stunning and I love the colour and quality. Despite being close-set, the gore is not too painful although is a little skewed off onto the breast due to being in the way! It cuts in slightly at the top on one of my breasts (the larger one) but, after trying on the Cleo Marcie, I think this is a shape rather than size issue due to having more tissue up top than the right as Cleo Lucy is a classic full on bottom bra / Cleo Marcie classic full on top bra.

I think I agree that Cleo unpadded bras might run tighter than normal in the band but, unfortunately, this has not worked out in my favour or is not tight enough for me. Even on the tightest clasp, the band rises a lot at the back so I'm going to have to return it despite everything else being great.

Strap separation:
Are too far apart
Band fit:
The band is definitely too big
Cup's width:
There is empty fabric on the sides (Cup too wide)