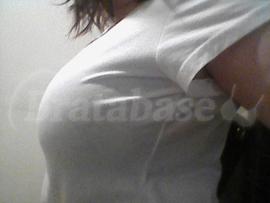 Despite how it sounds on paper, this is the best bra fit I've found so far. I suspect that my cup size is actually slightly larger than this, because the similar Wacoal 855170 was definitely too small. The 85567 (of which I have seven, so I feel confident in them) is a little too small in the cup volume and underwire height and the gore doesn't quite lie flat against the sternum, but it gives fantastic support and feels as if it fits (even though it doesn't, quite).

I had a professional fitting at Nordstrom, but she never told me my measurements or size, just threw three 80$ bras of various sizes in with me (I had told her I was on a budget and she had sounded sympathetic, maybe she was hoping I wouldn't actually check the prices? I literally can't afford not to check prices); she threw in a couple others after I found her and asked if she had anything on sale, and thus I ended up with a beige Wacoal 85567 34H for 45$ (although there were bras that fit better, I couldn't afford them).

If I'd known then what I know now, I would have written down which brands/models/sizes fit me because I could have looked for them in sales or auctions (20/20 hindsight)

I do have the problem with this bra that I have with every underwire bra I've ever had (at any size) in that it can initially fit very well but after some hours of wearing it, the fabric pulls off the underwire so it starts pinching at the side because I will now have bare fabric at the top of the underarm-underwire which causes the breast to spill over slightly and get pinched.

Despite how this sounds, it feels so good every time I put one on! (and wear it all day)

Gives fantastic support
Straps are wide at shoulder so bra doesn't start digging into shoulders
Three hooks at back give full support
Although can be hard to get on initially due to tight band, band seems to stretch just enough to be easier to put on and not get too stretched out (I have had my 85567s for three months as of November, and I have three pre-owned one of which was fairly used before I got it and all of which have the same excellent sizing and support so I am guessing they won't over-stretch as long as taken care of, e.g. hand-washed in delicate and never machine-dried etc.
Pretty good-looking for such good support

After wearing for a few hours, underwire "hides" and causes pinching on breast tissue under arm -- but this may or may not be the bra, as I always have this issue with any bra. (It's like the underwire is smaller than the channel it is placed in)
Can be expensive
Could be available in more/prettier colors

[ EDIT: the bra I took the pictures of is a Cappucino-colored one I bought new, not the beige one I got for 45$ ]

Center gore placement:
Doesn't lie flat against sternum
Underwire length:
Is too short on the side, boobs escape
Top of the cup:
Cuts into breast tissue (quad boob effect)
Strap separation:
Not a problem