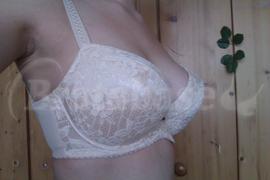 When I took this bra out of the box, I first felt a little disappointed. It appeared to be a bit of a dull colored nude bra. But then I put it on, and wow, it turned out to be very beautiful https://d28qt14g3opchh.cloudfront.net/smileys/icon_smile.gif" alt=":)" /> It has a bit of of a pink/golden glow depending on the light. The look overall is very sophisticated.

For me, the gore is still a little high, which influences the rest of the fit. I plan to alter that, but for now, with a little padding I still get enough uplift and support https://d28qt14g3opchh.cloudfront.net/smileys/icon_smile.gif" alt=":)" /> I always love the look of EM's plunges both with and without clothes.

On the website, EM says this bra runs tight, and that is true even for this custom size (I did not expect that). I'll have to wear it with an extender for now.

EDIT: replacing the original thick, sturdy underwires with thinner ones of the same shape and length entirely solved the problem of the poking center gore. Turned out it wasn't too high after all https://d28qt14g3opchh.cloudfront.net/smileys/icon_smile.gif" alt=":)" />

Center gore comfort:
Underwires dig into sternum, because they are too high
Strap separation:
Not a problem
Band fit:
Can't quite fasten the bra (band too small)