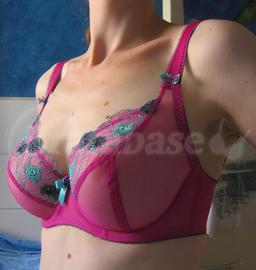 I have Lyla in two colourways, amethyst and black. Lyla amethyst in 28F was my first choice, my standard cup size with a smaller band as Freya is known for it's loose bands.

The band is ok but could be more stretchy. That's my overall complaint about Freya bands, they are very loose so that I have to size down, but not stretchy enough in my opinion.

The straps are really beautiful, wide and comfortable. They're very long and they don't stretch a lot (just like the band which is partly made of the straps).

My biggest problem concerns the cup fit. The first thing is that the cups run very high on my chest, more like a full cup not a plunge bra which it's supposed to be. Another issue is the top of the cups. I have full on the bottom (and empty on the top) boobs, and I can't quite fill the cup at the same time as the edge cuts in the breast tissue particularly near the center gore.

The center gore is hurtful and I don't exactly know why. I suppose it's because I don't have any fat on the sternum and this is my recurrent problem in bras with hard underwires.

Due to the cup fit problem, I've tried Lyla in 28E, but I's definitely too small. Unfortunately it seems that I'm not compatible with this bra and that's why I won't try any Freya bras in this style. That's quite a shame, because the design is just beautiful and Lyla liquorice was very tempting.

Center gore comfort:
Underwires dig into sternum, because they are too low
Strap separation:
Not a problem
Top of the cup:
Wrinkles, can't quite fill it