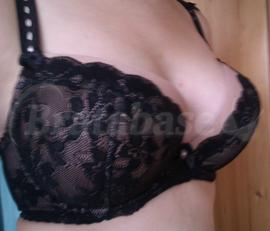 So I went back to wearing this bra. Of every brand and model I've tried so far, Ewa Michalaks plunges are still the best fit. At first the bra gaped more on me than it does now, although I still have to get some support from the straps, and not only the band. The gore dug in painfully when I first got it and for the couple of times I wore it after that. Even bending away the underwires didn't help that much: after a day of wearing I had scratches at the fold of my breasts, of which one even left a scar. Today I am wearing it again for the first time in a while, but the gore doesn't hurt me so much anymore. Maybe because I fill out the cups better now. I hope there is a way of altering so that I can get almost all support from the band. EM bras are quite sturdy and have strong underwires. I never had this problem before I started bra fitting in my true size, but the straps are a bit too short and therefore too tight for my taste. Of course, I kind of need that now for support, but they do dig into my shoulders.

EDIT: replacing the original thick, sturdy underwires with thinner ones of the same shape and length entirely solved the problem of the poking center gore. No more scars for me, thank you https://d28qt14g3opchh.cloudfront.net/smileys/icon_smile.gif" alt=":)" />

Center gore comfort:
Underwires dig into sternum, because they are too high
Strap separation:
Not a problem